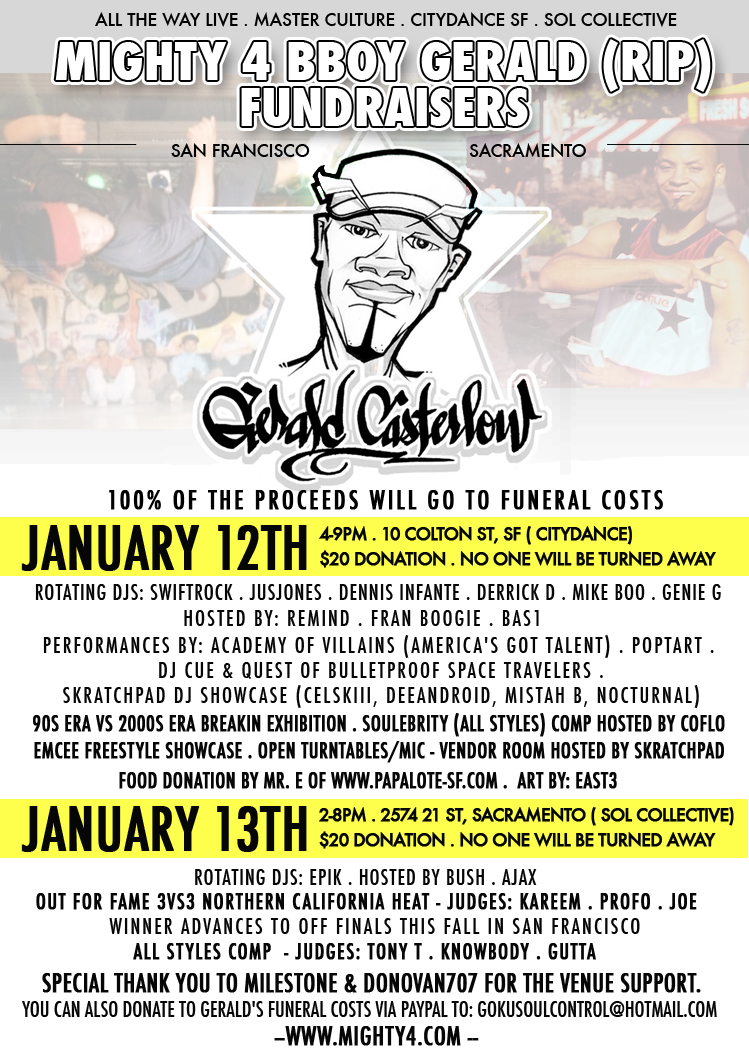 100% of the proceeds will go to funeral costs.

MORE UPDATES TO BE ANNOUNCED THIS WEEK!

Special Thank you to Milestone & Donovan707 for the venue support.

If you cant make it to the jams, you can also donate to Gerald’s funeral costs via paypal to: Gokusoulcontrol@hotmail.com

Gerald Casterlow was, and always will be, an inspirational person on and off the dance floor.

On the dance floor he inspired people on a global scale with his innovative moves and combinations which lead to winning countless crew and solo competitions across the planet. Gerald’s first competition with Rock Force Crew in San Francisco brought them to the final battle; Rock Force Crew vs Style Elements – a battle which echoed like a cannon blast heard around the world. People outside of California quickly caught wind of this battle and began to take interest. Gerald was one of the first b-boys in California to master the air-flare and quickly added it to his already vast arsenal of moves which aided in two of his most memorable accomplishments in the dance world: 1st place at Battle of the Year in Germany with Rock Force Crew, and 1st place in the 1 on 1 competition at Rock Steady anniversary in New York.

On December 23rd 1998, shortly after winning Rock Steady anniversary, Gerald was in a car waiting for a friend when he received a near fatal injury by a stray bullet to the head, a victim to being in the wrong place at the wrong time. The gunshot nearly took his life but wouldn’t hold this warrior down. He came back and regained majority of his moves and continued to tour and dance with Climax Soul Control while teaching classes at the SCMX Dance Academy in Fresno, Ca.

Outside of his personal career Gerald was a selfless and giving person who loved to share his craft with the community and was never selfish with his knowledge of the art form. A true gift of Gerald was how he could translate his grasp on the concepts behind movement in a manner others could easily comprehend. While teaching others new moves he could analyze them and easily pinpoint what was missing and what could compliment the movement. He would spend hours on end helping others learn new moves while always maintaining a patient and positive energy while teaching.

On December 23rd 2012, 14 years to the day after suffering from the gunshot to the head Gerald suffered a seizure and suffered brain trauma. After two hospitals confirmed the lack of brain activity and Gerald was removed from life support on the afternoon of December 30th and stopped breathing that evening.

Gerald we will miss you dearly and thank you for the Legacy you left the community.